Under Miranda v. Arizona (1966) 384 U.S. 436, 473-474, once an “individual indicates in any manner, at any time prior to or during questioning, that he wishes to remain silent, the interrogation must cease.”  If police officers continue to interrogate a suspect after that suspect invokes his right to remain silent, the police “squarely” violate Miranda.

Brief Synopsis: Once a suspect tells police, “I don’t want to talk no more,” the police must stop all further questioning under Miranda.  In the following murder and attempted murder, police persisted in questioning, eventually eliciting incriminating statements.  Defendant was then convicted, but on appeal, the conviction was reversed for the Miranda violation.

In the fifty years since Miranda was decided, many cases have received judicial review wherein a suspect states he wants to remain silent, but then makes a later statement spontaneously, with police prompting.  This can “cast retrospective doubt on the clarity of [his] initial request itself.” Smith v. Illinois (1984) 464 U.S. 91, 98-99.  Davis v. United States (1994) 512 U.S. 452, 458.

When this happens, police may continue asking questions that help the investigation, rather than clarifying if the suspect is waiving his or her right to remain silent.

Other times, police simply seem to ignore the suspect’s invocation of the right to remain silent, especially when the suspect is young or the crime alleged is especially serious.  When police continue the questioning, and the suspect later admits to the crimes at issue, judges will often find the prior invocation was ambiguous. 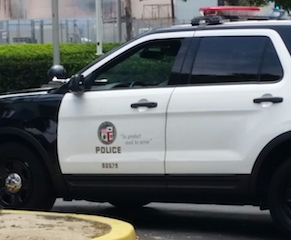 LAPD Cruiser
We think this gamesmanship by police has gone on too long and needs to stop.
On Friday, July 22, 2016, the U.S. Court of Appeals seemed to put its foot down on this shady police practice in Kevin Jones, Jr. v. K. Harrington (2016 DJDAR 7446).

In 2003, the Los Angeles Police Department had suspicions that Kevin Jones, then 19, was involved in a gang shooting that killed one person and left two injured.  Detectives picked up Jones and took him to the police station.  After several hours of questioning, Jones told the officers, “I don’t want to talk no more.”

Undeterred, the police kept asking Jones questions about the shootings.  Eventually, Jones made a number of incriminating statements.

The District Attorney then filed a criminal complaint against Jones.  The incriminating statements were then introduced to the jury and the jury convicted Jones of first degree murder, two counts of attempted murder, two counts of shooting at an occupied vehicle and assault with a firearm.  The judge then sentenced Jones to state prison for seventy-five years to life.

On appeal, the court of appeal ruled that Jones’ invocation of his right to remain silent was rendered ambiguous by Jones’ subsequent admissions.

Jones then appealed to the Ninth Circuit Court of Appeals.  This court began its analysis of Jones’ writ by looking at the Anti-Terrorism and Effective Death Penalty Act of 1996 (AEDPA).  Under AEDPA, a habeas petition can only be granted if the state court’s ruling on the prisoner’s claim “resulted in a decision that was contrary to, or involved an unreasonable application of clearly established law, as determined by the [U.S.] Supreme Court,” or “resulted in a decision that was based on an unreasonable determination of the facts…”

In looking at the application of the law in the case, the court first looked at the facts of the case. In August of 2003, three teenagers were stopped at a gas station that bordered on the territory of the Westside Rolling 90’s Crips.  The teenagers were members of the Eight Treys Gangster Crips, the rival gang of the Westside Rolling 90’s Crips.  A black Ford pulled up to the teens.  An African-American male wearing a Cleveland Indians hat leaned out the window and shouted, “Fuck Eight Treys.  This is Westside Rolling Crips.”  The Ford then drove off.

The three teenagers finished pumping their gas and left the gas station.  The same black Ford then drove up alongside the three teenagers and a light-skinned African-American made a Rolling 90’s sign, leveled a semi-automatic weapon at the teens and opened fire.  Two teens were shot, as well as a bystander nearby.  One of the teens died.

The Ninth Circuit noted that officers found a witness who told them that Jones had a Cleveland Indians hat, drove a black Ford Escort and was a member of the Rolling 90’s.

However, Jones told police he had no knowledge of the incident.  Officers then lied to him, telling him they had witnesses who identified his car as the one used in the shooting.  Jones then said he heard about the shooting a few days later.  He then said his car was stolen on the day of the shooting, but it was then returned later.

Jones then said to the police, “I don’t want to talk no more, man.”  The Ninth Circuit held that at that point, officers had to terminate their questioning.  “There was no ambiguity.”

The Ninth Circuit therefore reversed the lower court and held that Jones was entitled to be released from custody pending the prosecution’s decision on asking for a new trial.
The citation for the U.S. Ninth Circuit Court of Appeals ruling discussed above is Kevin Jones, Jr. v. K. Harrington (9th Cir., 2016) 829 F.3d 1128.
For more information about Miranda rights and the Fifth Amendment, please click on the following articles:
Contact us.