Brief Synopsis: Murder conviction set aside via a petition for a writ of habeas corpus when defense counsel finds out that sniff-dog evidence was unreliable and subject to mandatory prosecution disclosure under Brady v. Maryland, but was not disclosed to defense counsel during trial (and defendant was convicted).

Gilbert Aguilar was convicted of murder in the first degree involving the death of John Guerrero in 2001.

On that fateful day, Guerrero was driving on Amar Road in La Puente, California.  He was not affiliated with any gang.  He was looking for a restaurant to eat.  He had four passengers.

Guerrero drove by several Hispanic males dressed in while baggy shirts standing near a “primered” white Volkswagen Beatle.  Omar Soltero, one of Guerrero’s passengers, said he could see the Hispanic males running toward them in his rear view mirror.

Trying to avoid any confrontation, Guerrero kept driving down Amar Road Guerrero and his friends then decided to go to a restaurant in the opposite direction.  Guerrero then made a U-turn and drove back on Amar, passing the same four Hispanic youths.  The youths spotted Guerrero and “threw up their hands.”  One of Guerrero’s passengers interpreted this as “throwing up a neighborhood” to show their gang affiliation. 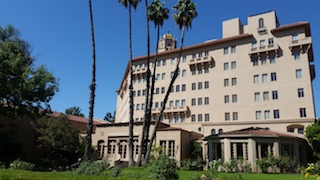 U.S. Ninth Circuit Court of Appeals
Guerrero drove a few more blocks and came to a stop at a stop light.  A young Hispanic male wearing a baseball cap and a white-shirt walked into the street and approached Guerrero’s car.  The passengers in Guerrero’s car all ducked down, fearful of what they thought was coming.  The young male calmly walked up to the driver’s side of Guerrero’s car and shot Guerrero, killing him.  The youth then walked back to a waiting car and drove away.
A month after the shooting, a police artist made a sketch of the shooter from the neck-up.  The picture was made based on descriptions of the suspect by three witnesses.  A probation officer thought the picture looked like Gilbert Aguilar.

Aguilar was then arrested and explained that Richard Osuna, a young Hispanic known as “Gangster” was the shooter.  Aguilar and Osuna were members of the same gang.  Aguilar explained further that Osuna’s younger brother had been shot the week before Guerrero was killed and that Osuna was looking to avenge the shooting.  More significantly, perhaps, was that Osuna and Aguilar looked remarkably similar.  Aguilar also had an alibi as to where he was, with witnesses.

The prosecutor, however, had Reilly, a “trained scent dog.”  Reilly had identified Aguilar’s scent on the Volkswagen over a month after the murder and several weeks after the car was impounded.  It was generally understood that a scent on a vehicle remains detectable to a trained dog for just a week, but at the preliminary hearing, a police officer testified that a scent can remain indefinitely “as long as the vehicle is not used by other people or things.”

The case went to trial, during which the prosecution’s main theme was that the defense could not explain why Aguilar’s scent was found in the getaway car.  The prosecution characterized this evidence as conclusive evidence.  The trial lasted six days, after which the jury convicted Aguilar. The judge then sentenced him to 50 years to life in prison.

Unbeknownst to Aguilar, the Los Angeles District Attorney’s Office had stipulated in a separate trial six months before that Reilly had mistaken identifications in two separate incidents.  In one case, Reilly identified the scent at a crime scene as belonging to someone who had been in prison at the time of the crime.  The prosecution never disclosed this significant history about Reilly to Aguilar’s counsel and even argued to the jury that Reilly’s scent identification was foolproof.

Aguilar’s counsel then found out about Reilly’s problems in a chance conversation with a public defender.  He immediately prepared and filed a writ of habeas corpus, arguing that had he known about Reilly’s history, he would have objected to the dog scent evidence on foundation grounds.  He further argued that the prosecution’s failure to disclose Reilly’s history was a Brady violation.

The Court of Appeal denied his habeas petition.  Aguilar then appealed to the federal district court, the United States Court of Appeal for the Ninth Circuit.  It held that there was no doubt that Reilly’s history of making erroneous scent identifications was exculpatory evidence.  It also held that the prosecution had knowledge of this evidence and suppressed it, citing to the court reporter’s transcript from the other case with Reilly’s mistaken scent.  In that case, the Los Angeles District Attorney’s Office stipulated to the mistaken scent identification and the judge suppressed the scent identification from Reilly.  Such knowledge was imputed to the prosecutor in Aguilar’s case.

Accordingly, the federal appellate court set aside the conviction and directed that the State of California release Aguilar.  We at Greg Hill & Associates applaud this result, but lament that it only was possible following a coincidental conversation between Aguilar’s counsel and another attorney.  We have grave concerns that prosecutors often suppress similar evidence and no such coincidental conversations take place to disinfect the mischief that took place.
The citation for the U.S. Ninth Circuit Court of Appeals ruling discussed above is Jeanne S. Woodford v. Gilbert R. Aguilar (9th Cir., 2013) 725 F.3d 970.
For more information about prosecutorial misconduct, click on the following articles:
Contact us.