Home
Other Information
Criminal Defense Articles
May Police Lie About the Reason for Traffic Stop?

May Police Lie About the Reason for Traffic Stop?

Brief Synopsis: The police may lie about the reason for a traffic stop as long as there is truly other legal grounds, based on reasonable suspicion, for making such a stop.  In the following case summary, police had reliable information about a defendant transporting meth from Washington State to Minnesota and pulled him over in Montana based on that once police confirmed the car and driver fit the suspicion, but lied about the reason for the stop.  This was not illegal.

The United States Court of Appeals for the Ninth Circuit recently ruled, in evaluating a motion to suppress where police admittedly lied about the reason for the traffic stop, that such lying is permissible if other facts known to the officer established “reasonable suspicion to believe that criminal activity may be afoot.” United States v. Arvizu (2002) 534 U.S. 266, 273.

The lying officer made his 2012 stop of Hector Magallon-Lopez outside Billings, Montana, but the case law applicable to this federal case equally applies throughout the Ninth Circuit, which includes California.

Officers working with the investigating officers suspecting an interstate drug-trafficking ring learned through wiretap intercepts that a shipment of methamphetamine would be traveling by car from Washington state to Minnesota.  The car transporting the drugs was owned by Hector Magallon-Lopez, who was also driving it at the time of the stop. 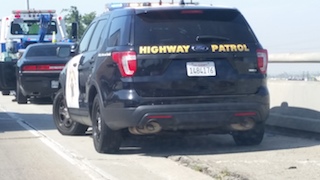 CHP Traffic Stop
The officers learned from wiretap information that on September 27, 2012, Juan Sanchez would be driving from Yakima, Washington to Minneapolis, Minnesota with another man nick-named Chaparro in a green, black or white vehicle with Washington plates.
Based on cell site information obtained from Sanchez’s cell phone, police estimated that the car would be traveling through Bozeman, Montana sometime between 3:00 a.m. and 4:00 a.m. on September 28, 2012, on Interstate 90.

About 3:00 a.m. on September 28, 2012, officers spotted a green Volkswagen Passat with Washington plates traveling eastbound on Interstate 90.  An officer pulled alongside the car and confirmed there were two men inside.  Both also appeared Hispanic.

The officer relayed the car’s license number to another officer, who confirmed that the car was registered to Hector Lopez and that Mr. Lopez lived in Yakima, Washington.  The car consequently appeared to be consistent with DEA investigation information.  Once officers obtained this information, officers decided to make an investigatory stop.

The officer then pulled over the Passat, but without observing any traffic violation.  However, the officer advised Magallon-Lopez that the reason for the stop was Magallon-Lopez’s failure to signal properly before changing lanes.  The officer did not want to disclose the “true nature” of the investigation.

The police officers then questioned both occupants and one of the men said his name was Juan Sanchez, exactly the guy that the wiretap information revealed would be involved with the transportation of the methamphetamine.  The officers then asked Magallon-Lopez to pull up his sleeves, which revealed tattoos as the wiretap information described would be on the transporters.  Then Sanchez and Magallon-Lopez indicated they were enroute to Minneapolis.

The police then brought a drug-detection dog to the scene.  The dog walked around the car and alerted officers to the presence of drugs.  At that point, the officers seized the car, got a search warrant for the car and found about two pounds of methamphetamine in the car.

The big issue in the case was whether the traffic stop of the car was lawful.  After all, the Fourth Amendment permits investigatory stops if the facts known to the officers establish “reasonable suspicion to believe that criminal activity may be afoot.” Arvizu, supra.

Here, Magallan-Lopez cannot contest that the officers had reasonable suspicion based on the wiretap.  The information came from the suspects directly, so it was “presumptively reliable” absent circumstances suggesting that the suspects were lying. Ewing v. City of Stockton (9th Cir. 2009) 588 F. 3d 1218, 1224-25.  Here, there were no such circumstances.

However, the issue Magallan-Lopez raised was that the officer’s lie was determinative as to stop’s legality.  In response, citing Whren v. United States (1996) 517 U.S 806, 812-813, the court of appeals noted that an officer may investigate a more serious offense if the stop is only for a traffic offense.

In other words, the objective factors are what matter, not what the officer said or was thinking.  Thus, the stop is lawful even if the officer falsely cites the basis for the stop a ground that is not supported by reasonable suspicion.  However, the facts justifying the stop objectively must be known by the officers nonetheless. Moreno v. Baca (1995, 9th Cir.) 431 F. 3d 633, 639-640.

We do not like this opinion at all.  It seems to open up a loophole for officers to make pre-textual stops and then later claim they knew certain things, when in fact they did not at the time of the stop.
The citation for the Ninth Circuit Court of Appeal ruling discussed above is United States v. Hector Magallon-Lopez (9th Cir., 2016) 817 F.3d 671.
For more information about traffic stops, please click on the following articles:
Contact us.