Home
Other Information
Criminal Defense Articles
May a Judge Strike a Gang Allegation in Plea in Open?

May a Judge Strike a Gang Allegation in Plea in Open?

Make no mistake about it, Orange County prosecutors are often exceedingly zealous, especially if there is public interest in a certain issue such as DUI or gang activity.

The Reader’s Digest Version: The California Supreme Court held that a judge, in sentencing defendant under a plea in the open, may dismiss a gang enhancement.

In the case of Alexis Alejandro Fuentes, this zeal revealed itself in an appeal by the Orange County District Attorney’s office when a judge in Orange County dismissed not only the sentencing enhancement that would be associated with a gang enhancement, but the allegation itself, too, if defendant would enter a plea to the underlying charges.  Defendant then did to avoid a sentence that would have been four years longer with the gang enhancement.

The underlying case was not a highly publicized gang murder or act of violence.  Mr. Fuentes was charged with the unlawful taking of a vehicle (Vehicle Code § 10851(a), also known as joyriding) and receiving stolen property (Penal Code § 496d(a)).  These two offenses were charged as felonies.  The prosecution also alleged as an enhancement that Fuentes committed the charged offenses “for the benefit of, at the direction of, and in association with . . . a criminal street gang, with the specific intent to promote, further, and assist in criminal conduct by members of the gang” (Penal Code § 186.22(b)).

After Fuentes accepted the judge’s offer (this was in 2013), the District Attorney appealed the judge’s decision to strike the allegation of gang activity, but did not appeal the sentence. 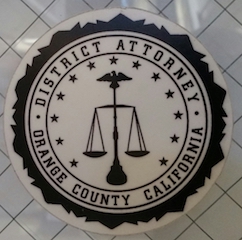 OC DA's Office Emblem
One may wonder why this was appealed, so a little background information is helpful to understand the context of what the prosecutor was unhappy with.
In 1988, the California Street Terrorism Enforcement and Prevention Act (STEP Act) was enacted at Penal Code § 186.20, et seq.  Under this act, a person who commits certain felonies is subject to increased punishment.  For example, under Penal Code § 186.22(b)(1), at issue for Fuentes here, punishment for violating Vehicle Code § 10851(a) is increased between two and ten years.

The issue the Orange County prosecutor most likely had in mind is that by dismissing the enhancements, the prosecution would lose sentencing enhancement in future cases for Fuentes.  For example, if a defendant commits a crime that is gang related under § 186.22(b)(1) and defendant reoffends, Penal Code § 1192.7(c)(28) turns the “prior gang-related felony offense into a strike.”People v. Briceno (2004) 34 Cal.4th 451, 465.
In other words, even if the punishment is struck, an enhancement allegation could affect defendant in future cases.  Striking the penalty enhancement does not operate to defeat the factual finding of the truth of the allegation; instead it merely serves to prohibit a sentence enhancement.
In the STEP Act, a judge is allowed to strike the additional punishment for the enhancement.  Penal Code § 186.22(g).  However, under Penal Code § 1385(a), enacted in 1872, a judge has the discretion to dismiss an action in the furtherance of justice.

The Supreme Court of the State of California, in People v. Alexis Alejandro Fuentes (2016 DJDAR 7410), ruled in favor of the trial court judge.  It disagreed with the Orange County District Attorney’s Office and their interpretation of § 186.22(g).

We think this is a powerful decision, as it pushes back on the prosecution’s attempt to have exclusive power over how a defendant might be sentenced in the future.  Indeed, what the Orange County District Attorney was seeking, for practical purposes, was to override the power of a judge to control the sentencing of a criminal case.  This would give the prosecution far too much power.  The California Supreme Court got it right.
The citation for the California Supreme Court ruling discussed above is People v. Alexis Alejandro Fuentes (2016) 1 Cal.5th 218.
For more information about gang crimes and sentencing enhancements, please click on the following articles:
Contact us.