Home
Other Information
Criminal Defense Articles
May a Judge Commit One As an SVP Before His Sentence Ends?

May a Judge Commit One As an SVP Before His Sentence Ends?

In the context of sex crimes, sexually violent predators (SVP’s) are considered the most dangerous to the public.  However, even those adjudged as SVP’s have certain rights, although their families may abandon them.

The Gist of this Article: A judge may not commit a sex offender as an sexually violent predator (this involves a trial) until the defendant finishes his prison term and is eligible for release back to the public.

Sometimes, perhaps out of concern for public safety, the prosecution seeks a trial to determine if someone is an SVP, or persists in seeking such a trial, before the individual is eligible.  After all, if the individual has committed a horrendous crime, or series of crimes, what is the harm?

This rationale seems to have been the trial judge’s approach in the following SVP trial and commitment order involving Thomas Earl Putney.

In 1990, Putney sexually molested his two-and four-year-old cousins, as well as a nine-year old neighbor.  In 1991, he pleaded no contest to three felony counts of lewd acts on a child under age 14.  He was sentenced to ten years in state prison for violating Penal Code § 288(a).

In October 2002, shortly before Putney was to be released on parole, the People filed a petition seeking his commitment to a state hospital as an SVP.  He admitted to the allegations in the petition and was committed to Atascadero State Hospital for two years.  At the end of the two years, the People did not seek to recommit him as an SVP.  He was thus released to the public. 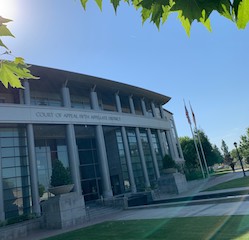 Court of Appeal Fifth Appellate District Fresno
Interestingly, Putney could not find a place to live, so he returned to prison.  At this point, the People filed a second petition seeking his commitment to a state hospital as an SVP.  He again did not contest the petition and was committed to Atascadero State Hospital for another two years.
When Putney was about two months before being released again, the People filed a petition to recommit Putney as an SVP.  This was in July, 2007.

The SVP trial was continued many times and ultimately did not begin until April, 2014.  In the meantime, in 2010, Putney was arrested and charged with felony possession of a dirk and dagger when he was then housed at Coalinga State Hospital.

He pled no contest to the dirk and dagger allegation and admitted three prior convictions for serious or violent felonies (strikes).  The Fresno County trial court sentenced him to 25 years to life in January, 2011.  The Fifth Circuit Court of Appeal affirmed the judgment in July, 2012 and the state Supreme Court denied review.

At the SVP trial, two experts testified that Mr. Putney suffered from pedophilia and other disorders that contributed to an impaired ability to control his behavior.  They concluded that Mr. Putney was substantially certain to reoffend if released from custody, although both experts acknowledged that his release was not likely for many years due to his 25 to life sentence.  The jury found Putney was an SVP and the trial court committed him to Coalinga for an indefinite term.

Putney appealed the commitment order to the First Appellate District, arguing the SVP proceeding should have been dismissed once his sentence of 25 years to life was affirmed and because, at that point, the SVP court lost jurisdiction.

Putney appealed the commitment order to the First Appellate District, arguing that the SVP proceeding should have been dismissed once his sentence of 25 years to life was affirmed and because, at that point, the SVP court lost jurisdiction.

The First Appellate District agreed with Putney that the trial court acted in excess of its jurisdiction by entering the recommitment order.  It found that Mr. Putney did not meet the definition of an SVP because he had no prospect of being released from custody for many years (25 years to life) and therefore he posed no danger to the public.  The SVPA deals with prison inmates who have completed their sentences. People v. Buffington (1999) 74 Cal. App. 4th 1149, 1162.

Moreover, the SVPA contemplates that while civilly committed, the defendant is to be evaluated annually to determine if the person’s condition has changed so that the person no longer meets the definition of an SVP.  To commit the person now, before Mr. Putney is even eligible for release, would ignore the state’s understanding that a defendant’s mental condition can change so that he or she is no longer a public safety risk.