Our client, age 15, and his twelve year old neighbor decided to go to a local school with some spray paint.  Our client was enthralled with making videos and posting things on YouTube, so he saw the trip as an opportunity to film his friend while also acting as a lookout while his friend actually spray painted.

It was about 4:30 in the afternoon on a Sunday, so no school was in session.  No one was at the school except a janitor, who was at the other side of the school.  The two went to the back of the school, where some local gangs had “tagged” the wall with their gang’s initials and symbols.  The twelve year old crossed it out with spray paint, an act that by itself is extremely dangerous for what it signifies.

The duo went to several locations on the wall and did the same thing – the younger boy using spray paint to cover over graffiti while our client filmed his friend. 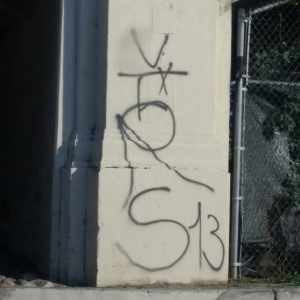 As the duo was leaving the school, a Verizon van drove by and then stopped at the school.  The kids walked by, nervously suspecting that the driver stopped to observe them.

The kids’ suspicions may have been correct, as a police officer then pulled up to the curb and asked the kids where they had been.  Our client quickly confessed to everything, even describing his role as a “lookout.”  The younger boy, in contrast, said nothing as one might expect from a hardened, street-wise felon.

The two were then taken to the Lomita Sheriff’s Station, where our client continued to talk.  The police, in fact, even described him as “very cooperative” when they released him to his mom several hours later.  When the sheriffs released him, they had both he and his mom sign a promise to appear in the Inglewood courthouse in about six weeks for arrest charges of violating Penal Code § 594(b), felony vandalism.

The next day, a Monday, the client’s mom called Greg Hill & Associates and met with Greg the same day.  The son was still shaken up by being in a jail for several hours.  He was also quite concerned that a felony could be punished by at least one year in prison.

Greg first listened to the client explain what had happened and describe what he told the police.

Greg then outlined for the mom and her son how he thought the case would proceed.  He explained how in juvenile matters involving a client with no prior history and an offense that is not violent or too serious, Welfare & Institutions Code § 654.1 provided a program (under various names depending upon the courthouse) of diversion before a filing would be made by the prosecutor.

Such a program would allow the client to “earn a dismissal” by fulfilling the terms of the program, such as keeping his grades up, attending school regularly, performing some community service (usually 40 to 100 hours) and sometimes, attending counseling of some sort.  Greg promised to write the Lomita Sheriffs and the Inglewood Juvenile Court District Attorney’s Office recommending such a program.

Greg then did so and a representative from the JOIN program responded.  JOIN, a program under Welfare & Institutions Code § 654.1, stands for Juvenile Offender Intervention Network.  It is a one year program that the District Attorney’s office administers and was perfect for our client.

Greg, the client and his mom then met with a representative of the JOIN program at the Inglewood District Attorney’s Office, where over a period of about two hours, twenty minutes, she discussed the case with our client and an agreed upon program was crafted for our client.

The mom was very happy that the program would, if her son successfully completed it, allow for dismissal of the case (no filing).  In our client’s case, he was required to perform 50 hours of community service within five months, 20 hours of which was required through a Long Beach animal shelter.  He was also required to improve his grades in school (he was a freshman in high school) and behave at home.  The mom no doubt enjoyed this last requirement, as it was no longer just she encouraging him to behave better.