In a Nutshell: The Second Appellate District, which handles appeals for cases from Los Angeles County Superior Court, ruled that a felony conviction for theft of an access card, Penal Code § 484e(d), is eligible for reduction to a misdemeanor under Penal Code § 490.2 of Prop 47.

Proposition 47 created a resentencing provision with the goal of reducing public expenditures for prisons and redirecting the money to education, drug treatment programs and skills training.  To effectuate this goal, it added several provisions to the Penal Code, most notably § 490.2.

Section 490.2 provides that “notwithstanding Section 487 [relating to grand theft] or any other provision of law defining grand theft, obtaining any property by theft where the value of the money, labor, real or personal property taken does not exceed nine hundred fifty dollars ($950) shall be considered petty theft and shall be punished as a misdemeanor” unless the individual seeking reclassification has one of the enumerated prior convictions or is a registered sex offender.

Against this new law, the case of Terrell Thompson tested whether grand theft of an access card (Penal Code § 484e(d)), where the amount taken was less than $950, fall under the umbrella definition of petty theft set forth in the new § 490.2. 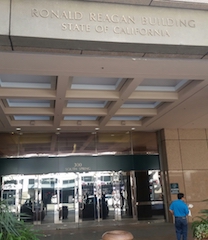 Court of Appeal Second Appellate District Los Angeles
This case is significant insofar as this law firm is concerned because the case of Mr. Thompon arose out of Los Angeles County and in other parts of California, courts have ruled that such a conviction does fall under 490.2 (People v. Romanowski (2015) 242 Cal.App.4th 151, 159) and others have ruled that it does not (People v. Cuen (2015) 242 Cal.App.4th 1227, 131) and People v. Grayson (2015 241 Cal.App.4th 454).
On August 6, 2011, Miriam Golf dropped her debit card after paying for gas at a Chevron station in Pomona.  The gas station surveillance video cameras recorded Terrell Thompson picking up the card.  Thompson then used the card at three different gas stations, purchasing $210.28 of gas and other items.

After Thompson was arrested, he was charged with two felony counts of grand theft of an access card, Penal Code § 484e(d), and two counts of second degree commercial burglary, Penal Code § 459.  About a month later, Thompson entered into a plea bargain wherein he pled no contest to one count of violating Penal Code § 484e(d) and the other counts were dismissed.  He was then sentenced to six years in state prison.

In December, 2014, after Prop 47 became law, Thompson petitioned Commissioner Wade Olsen in the Pomona Superior Court, which is part of Los Angeles County, to reclassify his felony grand theft of access card information to a misdemeanor.  Commissioner Olsen denied the petition, finding that Penal Code § 484e(d) does not qualify for relief under Prop 47.

Thompson then appealed to the Second Appellate Division.  The appellate court, in People v. Terrell Thompson (2015 DJDAR 13746) began its analysis, telegraphing quite clearly how it would eventually rule, by saying the “plain language” of § 490.2(a) “unequivocally expresses an intention that Proposition 47 apply to all Penal Code sections defining grand theft.”  This was so because 490.2(a)’s provisions apply “notwithstanding Section 487 or any other provision of law defining grand theft.”

In response to the Cuen court that theft of intangible access card account information is a qualitatively different personal violation than theft of more tangible items, the Second Appellate District disagreed, noting that such information is still personal property and Section 15 instructs that the provisions of Prop 47 are to be “broadly construed.”  Moreover a debit card is a tangible item.

The Second Appellate District also rejected Grayson’s rationale that grand theft of access card information was not easily quantifiable, so it was excluded from § 490.2, saying that Prop 47 defined § 490.2 to included all forms of grand theft, including 484e(d).  In other words, Grayson was creating a distinction that Prop 47 had ruled out already.

Grayson also declined to include § 484e(d) under § 490.2 because theft of access card information could involve identity theft.  However, the Second Appellate District noted that § 490.2 stated it included all forms of grand theft and 484e(d) was certainly one form of grand theft existing when Prop 47 was passed.

Therefore, the Second Appellate District reversed Commissioner Olsen and remanded the case back to him for further proceedings.
The citation for the Second Appellate District Court ruling discussed above is People v. Terrell Thompson (2d App. Dist., 2015) 243 Cal.App.4th 413.
For more information about the issues in Prop 47 case, please click on the following articles:
Contact us.