The following question is often asked of our office.  Our first response is usually, “well, what do you mean by dating?”  After all, in today’s Snapchat / Instagram / text-messaging world of teenagers and young adults, “dating” may only be going to a school dance together or maybe a party at a friend’s house, supervised by parents.  It also may be quite a bit more, including all forms of sex.

“Dating,” if it includes nothing more than occasionally holding hands and going to dinner, studying together at a coffee shop, going to a movie or going to a school dance together – and nothing more – is perfectly fine.  It is probably wise to have the parents of the young man and the young woman aware of the relationship and in approval of it.

Even this seemingly safe level of a relationship, however, can trigger false accusations of statutory rape (Penal Code § 261.5), sexual battery (Penal Code § 243.4), child molestation (Penal Code § 647.6, also called annoying a child under 18), oral copulation with a minor (Penal Code § 288a) or, more generally, lewd and lascivious conduct with a child (Penal Code § 288(a)) by a jealous person, a mistaken observer or an angry parent who may not understand how serious the consequences of such accusations can be for the eighteen year old. 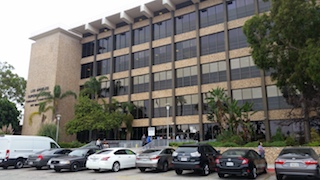 Torrance Courthouse
More shocking is the potential for the 15-year-old, once the relationship ends, to contact the police and, emotionally claim that she was forcibly raped by the 18-year-old, perhaps multiple times.  After all, her consent is irrelevant.  Her tears and the details of her claim help her credibility.
The consequences may be that the 18-year-old is convicted, or enters into a plea bargain wherein he is ordered to register as a sex offender under Penal Code § 290 for the rest of his life, may be barred from many occupations and may be ostracized by all his friends and even his family.

Worse yet, the 18-year-old may serve time in county jail or state prison, where sex offenders are treated with special contempt and often violence by other inmates.  It can be a very dangerous place for a sex offender.  One of our clients, age 18, spent time in county jail for statutory rape (he had quite a long record) and was attacked by other inmates, receiving a wound that required 90 stitches to close and left him with quite a scar.

Sometimes, there is no sexual contact, but the two who are “dating” may sext each other photographs that are meant to arouse the other and lead to sexual contact.  This can be a violation of Penal Code § 288.2 (transmitting sexual images to a minor with the intent to arouse) or Penal Code § 288.3 (contacting a minor with intent to commit a sexual offense).

Our advice to any adult, including someone who is 18, who seeks to date a fifteen-year-old is simple: do not.  Wait until she is 18.  It is simply far too dangerous.  While it may be coveted to claim one is “dating” such and so, there is a considerable price to pay if the minor wants revenge when the relationship ends or if a purportedly concerned parent wants to end the relationship.  It is best to not claim one is “dating” another person even if one wants to say this.  “Dating” can certainly imply sexual contact, which is illegal between a fifteen-year-old and an eighteen-year-old.  This obviously can be a big problem.

For more information about problems of dating a minor, please click on the following articles:
Contact us.
Serving Torrance, Long Beach, Compton, Airport Courthouses and Other Courthouses.