Home
Other Information
Criminal Defense Articles
I Received a Subpoena – What Should I Do? Ignore It?

I Received a Subpoena – What Should I Do? Ignore It?

So you were handed a subpoena or received it through the mail?  What exactly does it ask you to do?  Appear in person in court or at an attorney’s office?  Produce documents?  Is it for a civil case or a criminal case?  Who prepared the subpoena?  Are you concerned about getting in trouble by what you might say or know or have documents about in this case? Can you ignore it?

About This Article Briefly: To know what one must do or can do in response to a subpoena, it is best to show the subpoena to an experienced attorney who practices in the area of law the case involves.  The best way to handle or respond to any subpoena usually depends upon the specific case facts.

These are common questions we receive from people frantically calling our office.  It is often tough to answer all these questions without seeing the subpoena and discussing the case facts with the caller.  This short article, however, will seek to address some of the questions most commonly asked, such as those listed above, and give the reader background information to help make the reader feel more comfortable.

From the outset, it is important to recognize that a subpoena is considered part of the “discovery process.”  However, if one has experience with a subpoena from a civil case, i.e. a family law matter (i.e. divorce, child custody, etc.), an unlawful detainer or a personal injury matter, civil discovery rules generally do not apply in criminal cases.  See, e.g., Pitchess v. Superior Court (1974) 11 Cal.3d 531, 536, 113 Cal.Rptr. 897; see also California Code of Civil Procedure §§ 1985.3 to 1985.4 (for subpoenaing “personal records” like medical records, financial records or educational records, including the electronic forms of such). 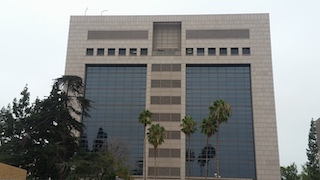 Van Nuys Courthouse
This is significant, we find, because in civil cases, when one demands records, the responding party is supposed to make the records available for inspection and copying during normal business hours, rather than delivering the documents to the court.  Evidence Code § 1560(e).  In a criminal case, the responding party must photocopy the records and deliver them to the judge (Penal Code § 1326(b); Evidence Code § 1560(e)).

Civil discovery rules, do apply in a criminal context, however, in only very limited scenarios such as a civil commitment proceeding such as in the special proceedings of a civil nature in the Sexually Violent Predators Act (Welfare & Institutions Code §§ 6600 – 6609.3).

If the subject matter of the subpoena concerns a criminal matter, it is paramount that one appreciate that there are really two types of subpoenas.  One requires a person to attend a hearing (Penal Code § 1326(a)).  The second is called a subpoena duces tecum (“SDT”), which requires the person to produce specific evidence in court (Penal Code § 1326(b) – (d)).

A district attorney or an attorney for the defendant can obtain records from a person or entity who is not a party to the case directly if the person or entity consents and signs a form authorizing the release of information to the attorney (Penal Code § 1326(d)).  If the person does not agree to produce the records, the attorney can issue an SDT to the entity’s custodian of records or the person to deliver the records to the court (Evidence Code § 1560(b); Penal Code § 1326(b) – (c)).

It is good to understand, in responding to the SDT, that Code of Civil Procedure § 1985(b), which requires service of an affidavit or declaration showing good cause for production of the requested items with an SDT, does not apply in criminal cases.  Michael B. v. Superior Court (2002) 103 Cal.App.4th 1384, 127 Cal.Rptr.2d 454.

Police officers are supposed to serve subpoenas in their county for either the prosecution or the defendant (Penal Code § 1328(a)), however, because of fiscal constraints, they often do not.  Many private defense attorneys instead use investigators or private process servers to get it done. The subpoena indeed may be personally served by anyone except the defendant himself or herself.

The subpoena may also be served by mail.  Penal Code § 1328d.  However, such service is not considered “effected” until the witness acknowledges receipt of the subpoena by telephone, by mail, or in person and identifies himself or herself by date of birth and driver’s license number or DMV identification card.  Penal Code § 1328d.

The subpoena must be served in time to allow the witness a “reasonable time” for preparation and travel to the place of attendance (California Code of Civil Procedure § 1987(a)).

Our advice to anyone considering doing nothing in response to a subpoena or SDT is to think twice about ignoring it.  When a witness who is properly served fails to appear, counsel sending out the subpoena may ask the judge to issue a bench warrant ordering the sheriff to bring the witness before the court.  Penal Code § 881, 980, 1196.  The judge can also punish disobedience to a properly served subpoena as contempt.  California Code of Civil Procedure §§ 1209(a), 1991; Penal Code § 1331.

For more information about going to court in general, please click on the following articles:
Contact us.
Serving Torrance, Long Beach, Compton, Airport Courthouses and Other Courthouses.