Our client, age 27 and a Navy veteran, had become a regular visitor to the Hustler Casino in Gardena.  She enjoyed its atmosphere and got along with everyone there.  She was generous in her tips to the dealers and was not one to sit at a table without a drink too long (although she did not drink alcohol). 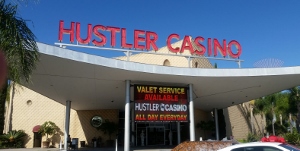 Hustler Casino in Gardena
Her easy-going manner and apparent wealth rubbed one security officer there the wrong way.  While she was friendly to him, he was jealous of her apparent immunity from stress.  He never returned her “hello” and often just stared at her.
One day, he instructed her to leave the casino.  There was no reason for her to leave.  She was not causing any argument or creating too much noise.  She asked him why he wanted her to leave and he answered, “because I say so.”  She immediately sensed that he was “riding his badge” to simply make her uncomfortable.

Accordingly, she left the table and proceeded to walk towards the exit.  The security guard walked behind her.  However, instead of leaving the casino, she turned a corner and climbed some stairs to report the unfair treatment to the security guard office.

When our client turned to walk up the stairs, the security guard used his radio to report he needed back up.  His transmission summoned two other security guards from the parking lot and one more from inside the casino.  Our client climbed the stairs to the top and tried to enter the security guard office.  It was locked, so she knocked on the door.

Our client was cornered at the top of the stairs.  No one in the security guard office would open the door, if anyone was indeed inside.  At this moment, the three other security officers arrived and, being under the impression that a drunken patron was lost and about to fight, proceeded cautiously up the stairs, preparing to tackle our client.

Just then the Gardena Police Department arrived, adrenaline pumping.  They observed the one security guard on the ground, in apparent pain.  They then tazed our client and she fell to the ground, repeating, “there is no need for any of this” over and over.

The police then handcuffed our client and took her to the Gardena Police Station.  A report was then prepared, corroborated by four security guards, that our client was disruptive and fought the one security guard.  She was released and immediately called Greg Hill & Associates.

Greg listened to the client explain the fabricated events and how the one police officer apparently had a vendetta against her because he was always working while she was always having fun.  He did not know that she was 100% disabled and able to live off her government paychecks.

Greg then appeared for the arraignment and spoke with the Torrance District Attorney assigned to the case.  Greg explained how the whole incident was fabricated and that the entire police report was a lie.

The prosecutor seemed dubious of this, but respectfully pointed out that with four uniformed security officers each saying the same thing, a jury might believe our client did commit a battery, as she was charged with battery.

Greg understood this sad reality, but suggested the case be referred to judicial diversion under AB2124.  The prosecutor agreed and suggested terms that were incredibly lenient – 20 Alcoholics Anonymous (AA) meetings and six anger management classes.  Our client would also have to stay away from the Hustler Casino, which she had already resolved to do.

Our client chafed at the thought of doing 20 AA meetings when she did not drink at all, but was smart enough to appreciate a dismissal is what really mattered.  She accepted the low offer and decided to earn the dismissal.  She understood that while she had been the victim of a jealous security guard, she was not going to let this incident scar her.  She was savvy enough to understand which battles to fight.

She appreciated Greg’s persuasive efforts and the light terms of judicial diversion, which the Torrance judge approved.