Evading a Police Officer a Violent Felony Under Federal Law?

A defendant with three prior “violent felony” convictions faces a mandatory fifteen year minimum sentence under ACCA.  Such prior offenses can include state court convictions.  The key question then is what type of state court offenses fall under the “residual clause” of § 924, which is a crime that “presents a serious potential risk of physical injury to another.”

About This Article Briefly: A conviction for evading a police officer, as a felony under Vehicle Code § 2800.2, is a violent felony under the federal Armed Career Criminal Act (ACCA), 18 U.S.C. § 924.

In the 2014 case of Michael Anthony Martinez, he pled guilty to being a felon in possession of ammunition, a violation of 18 U.S.C § 922(g).  During sentencing, the prosecutor and defense counsel argued over whether Martinez’s criminal history had three prior “violent felony” convictions.  He did have two prior felony convictions for domestic violence.

The prosecutor argued that Martinez’s prior felony conviction for evading a police officer under Vehicle Code § 2800.2 was a violent felony because it presented a serious potential risk of physical injury to others.  Defendant said such a conviction was not within the intent of the ACCA because, fundamentally, 2800.2 really is about not pulling over for a police officer for a while. 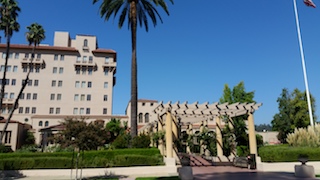 U.S. Ninth Circuit Court of Appeals Pasadena
The U.S. District Judge conducting the sentencing hearing, Lawrence J. O’Neil, held that Vehicle Code § 2800.2 was such a violent felony under the ACCA and sentenced Martinez to fifteen years in federal prison.
Martinez then appealed to the United States Court of Appeals for the Ninth Circuit.  In an opinion titled United States v. Michael Anthony Martinez (2014 DJDAR 15299), a three judge panel upheld the lower court’s ruling.

The court of appeal used a two part test from the Ninth District, which had considered the issue earlier, but for a different underlying offense, not Vehicle Code § 2800.2.  The case where such a two part test was set out first was United States v. Chandler (9th Cir., 2014) 743 F.3d 648, at page 650.

The first prong of the test was that an offenses was categorically violent if the conduct “encompassed by the elements of the offense, in the ordinary case, must present a serious potential risk of physical injury to another.”  Chandler, supra, at 650.

Second, “the state offense must be ‘roughly similar’ in kind as well as in degree of risk posed to those offenses enumerated at the beginning of the residual clause – burglary of a dwelling, arson, extortion, and crimes involving explosives.”

The first prong of the test is rather clear and evading a police officer certainly seems to satisfy the test.  After all, section 2800.2 requires that the pursued vehicle be driven in wanton or willful disregard for the safety of others.  Vehicle Code § 2800.2(b) then defines “willful or wanton disregard for the safety of persons or property” as including, but not limited to, driving during which “three or more [traffic] violations [occur] or  . . . . damage to property occurs.”
The second prong of the Chandler test is more complicated.  After all, is DUI such an offense?  In Begay v. United States (2008) 553 U.S. 137, 141, the U.S. Supreme Court said no because it did not involve “purposeful, violent and aggressive conduct.”  Begay at 144-145.  In other words, in crimes involving negligence or recklessness, the crime would not fit under the ACCA.

Turning to 2800.2, the court of appeals decided that Begay really did not apply because the conduct under 2800.2 is intentional conduct.  Moreover, other circuits had considered the issue in “vehicle flight” cases.  In Indiana, for example, there is a similar statute to 2800.2 and the U.S. Supreme Court ruled that felony vehicle flight was a violent felony for purposes of ACCA.  Sykes v. United States (2011) 131 S. Ct. 2267-2273-75.  The court reasoned that vehicle flight from police inherently poses a serious potential risk to the safety of pedestrians and other drivers, as well as a risk of violent confrontation with police.  The court even commented that vehicle flight may be more dangerous than residential burglary or arson.

The court of appeal then noted that within the Ninth Circuit, it had held that Oregon’s vehicle flight statute was a violent felony under the ACCA.  United States v. Snyder (9th Cir. 2011) 642 F.3d 694, 697.

Therefore, the fifteen year sentence was upheld on appeal.
The citation for the U.S. Ninth Circuit Court of Appeal ruling discussed above is United States v. Michael Anthony Martinez (9th Cir., 2014) 771 F.3d 672.
For more information about evading a police officer and resisting arrest, click on the following articles:
Contact us.