DUI Stop When Passenger Flicks Cigarette Ash Out Window? No

Your parents may have told you, “Don’t litter.”  You may have heard someone say that dropping a cigarette ash out the window is littering.  Whether it is littering is not the subject of this article (it is – Vehicle Code § 23111 prohibits throwing onto a road a lighted or unlighted cigarette).

Instead, this article is about whether a driver was unlawfully searched after being detained illegally when the basis for the officer’s contact was to contact the passenger for littering a cigarette ash out a car window.

Brief Synopsis: A detention of a driver was illegal, determined in large part by how closely the motorcycle officer parked his motorcycle to the car in making the stop and how quickly he requested the driver’s license, and therefore, the subsequent investigation was a prolonged detention.  Evidence suppressed and case dismissed.

The facts of the case are interesting because in the context of traffic stops taking place when the bars close, the facts of this case are likely repeated in almost the same pattern every Friday night and Saturday night across California in every major city.

At just past 2:00 a.m., on January 29, 2014, Officer Thomas Helfrich of the Napa Police Department was on patrol on his marked police motorcycle.  He observed a Ford Expedition with a driver and passenger turn left in front of him as he was stopped at a traffic light.  He allegedly saw the passenger holding a lit cigarette out an open window.  He allegedly saw the passenger make a quick flick of his fingers, dropping cigarette ashes out the window. 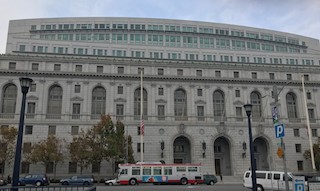 Court of Appeal Fist Appellate District San Francisco
Officer Helfrich decided to follow the Expedition.  Before he could catch up to the car, it pulled into a parking stall on Division Street.  He parked his motorcycle about three feet from the driver side door, not behind it.  As he dismounted his motorcycle, the driver, Nicole Theresa Linn, and her passenger got out of the car.
Helfrich first spoke to the passenger, asking him why he was flicking ashes out the window.  The passenger responded, “I don’t know.”  Instead of issuing a ticket for this or stopping the encounter, Helfrich turned on his body camera as if preparing for a lengthy encounter.

Helfrich then turned to the driver.  He asked her if she had been drinking, took her ID, ran a background check on her while she waited, checked her horizontal gaze nystagmus, asked her questions about her drinking, administered a breath test and concluded she was driving while under the influence.  He then arrested her.

The Napa County District Attorney then charged her with DUI.  Ms. Linn filed a motion to suppress, arguing that since the detention was without a warrant, it was the People’s burden to show the detention was justified.  Linn argued that the up to the point when Helfrich smelled alcohol, the detention was illegal.

This included when the officer asked Linn to identify herself, to produce her driver’s license, ran a records check with her license and told her to put out her cigarette and put down her soda.  There was no probable cause or reasonable suspicion to detain her.

The trial court granted the motion to suppress, citing to People v. Castaneda (1995) 35 Cal.App.4th 1222 for the law that once an officer takes possession of an individual’s identification , “that person is no longer free to leave” and there is a detention.

The People then appealed to the appellate division of the Napa County Superior Court, which reversed.  It relied upon People v. Lynch (2013) 217 Cal.App.4th 344, which said there is no detention under Castaneda if the subject voluntarily relinquishes identification to police.  We ask, why would anyone resist police in handing over one’s identification and risk an arrest for resisting arrest?  If this is so, there is never a detention and there can be no prolonged detention either.

Linn then appealed to the First Appellate District.

The appellate court, in its ruling (People v. Nicole Theresa Linn (2015 DJDAR 11288 (October 12, 2015)), noted from the outset that under the California Constitution, article 1, section 28, subdivision (d), federal constitutional standards apply in deciding motions to suppress based on claims of illegal search and seizure. People v. Woods (1999) 21 Cal.4th 668, at 674.

It then noted that in the ordinary course, a police officer is free to ask a person for identification without implicating the Fourth Amendment.  Hiibel v. Sixth Judicial Dist. Ct. (2004) 542 U.S. 177, 185.  However, as the appellate division of the Napa County court showed, there is some confusion over whether such taking transforms a consensual encounter into a detention.

The appellate court then explained that Helfrich needed a reasonable suspicion of unlawful conduct to detain Linn by asking her questions and for her to produce her identification.  The totality of the circumstances must show the suspicion was reasonable.  Here, when Helfrich requested information and Linn’s identification, he did not have such a suspicion.

This in and of itself was most likely harmless.  However, what happened next became an unlawfully prolonged detection and, consequently, illegal.  This was because a reasonable person in Linn’s situation would not feel she was free to leave.

The appellate court found this so because Helfrich parked his motorcycle just three feet from her car door and then stood even closer to her; and he took her license away from her and did a records check while she waited without further explanation.

The search that then followed was illegal.  Consequently, the First Appellate District reversed the appellate division and affirmed the trial court’s ruling.
The citation for the First Appellate District Court ruling discussed above is People v. Nicole Theresa Linn (1st App. Dist., 2015) 241 Cal.App.4th 46.
For more information about the issues in this case, click on the following articles:
Contact us.
Serving Torrance, Long Beach, Compton, Airport Courthouses and Other Courthouses.