Home
Other Information
Criminal Defense Articles
Do You Face Charges Related to a Chop Shop (VC 10801)?

Not all charges related to operating or working in a “chop shop” are related to criminal street gangs or result from a large police sting operation like one may see in movies, on television or read about in the news.

In a Nutshell: Criminal charges related to operations at a “chop shop” can range from minor municipal code misdemeanor offenses to serious felony charges, depending upon what is found, defendant’s criminal history, the level of cooperation of defendant and the position of victim(s).

The charges can be a misdemeanor, as the offense of operating a chop shop (defined at Vehicle Code § 250) is a “wobbler,” meaning it can be charged as a felony or a misdemeanor depending upon the scale of operations, the length of time the shop was in operation and the value of parts or cars sold.  The decision of how to charge the offense is up to the prosecutor, after taking into account the above factors, as well as the defendant’s prior history, especially for the same or similar offenses.

Similar offenses can include, but are not limited to, receiving stolen property (Penal Code § 496), tampering with a vehicle identification number (VIN) (Vehicle Code §§ 10750 and 10802), buying a vehicle with a tampered VIN (Vehicle Code § 10803) or having fraudulent vehicle registration (Vehicle Code § 4463).  The prosecutor may also be suspicious of the scale of operations if police find lots of DMV change of ownership documents at the shop. 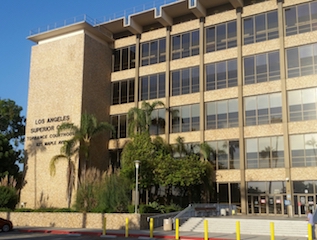 Torrance Courthouse
For some of our clients, especially those who may be new to the U.S., the term “chop shop” is an unfamiliar term.  What is a chop shop?  It is any building, yard, lot or even an office whose purpose is to take apart (chop), disassemble, dismantle, alter, reassemble, disguise or obliterate a VIN, replace parts, and then sell a stolen vehicle (including a motorcycle, truck, car or boat) for profit.  The owner, manager, operator or even employees can be charged with operating a chop shop under Vehicle Code § 10801.
There are defenses to such charges that are fairly intuitive once one understands the definition of a chop shop.  First, the cars may not be stolen.  The cars are validly tendered over to the shop to repair or modify with the owner’s full consent and knowledge of what is intended.  The cars will then be returned to the owner upon completion of the work.

Second, since the crime is a specific intent crime, one must participate in the operation with knowledge and intent that the stolen cars or stolen parts are intended for sale to someone other than the owner.  Therefore, a second defense is that the person charged simply did not know or have reason to know that the building, lot, yard or office was doing anything illegal.  This is often a hard defense to assert, but can be available to someone with a very limited role within the operation, i.e. a messenger or part-fetcher who drives from place to place getting spare parts for the owner or manager.

Third, there may have been an illegal search.  This defense is quite a bit less likely in “chop shop” cases because under Vehicle Code § 2805, law enforcement and district attorney investigators may conduct warrantless inspections of vehicles and auto parts stores under reasonable suspicion.  It is thus difficult to challenge such searches, but it must be considered, especially if the search exceeds the scope of what might be reasonable to inspect.

The penalties for a violation of Vehicle Code § 10801 as a misdemeanor can include up to one year in county jail and a fine of up to $1,000, plus penalties and assessments (which can boost the total owed to court to about $4,500), as well as restitution to the rightful owner(s) of the cars or parts.  In certain cases, a plea bargain can also include an obligation to perform community service, Cal-Trans or community labor, especially if probation is granted.

If the crime is resolved as a felony, the penalties are much more severe.  Defendant faces up to four years in state prison (to be served in county jail under AB109), fines up to $50,000 (plus penalties and assessments), restitution and the possibility of community service, Cal-Trans and community labor if probation is granted.

For more information about grand theft, click on the following articles:
Contact us.
Serving Torrance, Long Beach, Compton, Airport Courthouses and Other Courthouses.