The client lived with his mom, who rented out a trailer in the backyard of the home.  The client had a friend “from the street” who had rented the trailer for several months.  Our client did not even know his friend’s last name.

In a Nutshell:  No file in Compton Superior Court on case wherein our client was already on probation for sales of marijuana from a conviction one year earlier.  Police performed a “standard probation search” of the client’s home and looked in a trailer in the property’s backyard, that our client did not have access to because it was the living quarters of a friend of our client’s mom.  Greg brought this to the Sheriffs and DA’s attention and no case was filed.

One day, the police came to our client’s house to perform a “standard probation search,” which is illegal.  A waiver of Fourth Amendment rights as a condition of probation does not permit searches undertaken for harassment or searches for arbitrary or capricious reasons.  People v. Bravo (1987) 43 Cal.3d. 600, 610, 238 Cal. Rptr. 282, 738 P.2d 336.  The legal meaning of the word, arbitrary, when considered in the context of the previous sentence of Bravo, supra, [43 Cal.3d at page 610,] must relate to the executing officer's motivation.  Where the motivation is unrelated to rehabilitative and reformative purposes or legitimate law enforcement purposes, the search is arbitrary.  In other words, a “standard probation search” is illegal if there is no basis other than to search someone on probation based on the whim of the police.

As luck would have it, police found almost a pound of marijuana in the backyard trailer.  Our client was thus arrested and charged with possession for purposes of sales.  Our client and his mom explained that another person lived in the trailer and that our client did not have access to the trailer area, as it was normally locked.

The client’s mom immediately called Greg Hill & Associates.  The police still held our client at that time.  Greg Hill promptly called the Carson Sheriff’s and demanded to speak to the jailer, who politely listened to Greg, apparently aware of the circumstances of the client’s arrest.

Greg explained how the search was illegal because there is no such thing as a “standard probation condition.”  The jailer transferred the phone call over to the watch commander, who apparently had already given this issue some thought.  Greg continued, explaining that the search must still be based on a reasonable suspicion.  Greg cited to the Bravo case above.

The watch commander listened, but would not agree to release our client.

The next morning, our client was released.  However, when he was released, he was given a court date and signed a promise to appear on that date.

Greg advised him to contact a bail bondsman, as it was quite possible that at the arraignment, the prosecutor would most likely ask the judge to set bail or even deny bail based on the alleged probation violation.

Greg then contacted the Compton District Attorney’s office and advised them of his being retained, as well as of the big issue with the legality of the search.  Greg highlighted the issue, urging the office to look closely at the basis for the search. 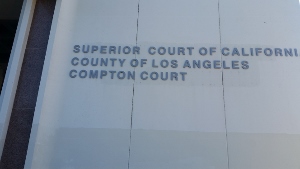 Compton Superior Courthouse
On the day of the arraignment at the Compton Courthouse. Greg and the client appeared, but did not see any listing for the client’s name. This obviously could be a simple administrative error, but it also could be that the District Attorney’s office declined to file a case.  After several hours of waiting for a case filing, the client and Greg ventured to the District Attorney’s office at about 11:00 a.m. (after an 8:30 a.m. arraignment time) and inquired into the case being filed.  The prosecutor’s office advised that they had decided not to file any case against our client.

This was obviously a big relief to our client, as he avoided a probation violation, a potential no-bail period of being in custody and the new case as well.  He was very happy that Greg had immediately jumped on the phone to speak with the Carson Sheriff’s office and the District Attorney’s office as well, citing to the exact case law that supported the client’s position that the search was illegal.