Arrested by the CHP, But No Case Filed? DOJ Record Updated?

It is not uncommon for police, or the CHP, to arrest someone, hold the person overnight and then the prosecutor declines to file a case.  Most people feel lucky and try to forget about the whole experience.  Others seek to sue the law enforcement agency for their interference with the person’s liberty, but they are told by attorneys that such a case for negligence will likely fail and, worse yet, if it fails, a judge can order payment of attorney fees to the government.

Why This Article Matters: If you are arrested (which carries with it a certain stigma of guilty) and no case is filed, law enforcement is supposed to update your criminal history to change the arrest to a detention only.  Penal Code §§ 849.5 and 851.6 require law enforcement to do this.

What such motorists often overlook is the insidious damage the arrest has caused to their criminal history.  Very often, law enforcement does not follow Penal Code §§ 849.5 and 851.6 to update the driver’s criminal history to change the record with the DOJ from an arrest to a detention.  Thus, the individual is scarred, often leading to adverse employment consequences, denial of loans, rejection for admission to certain schools, denial of the ability to rent or lease property, etc. 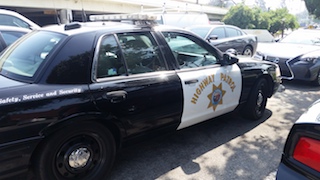 CHP Car
The CHP then sent its arrest report for Schmidt to the Santa Barbara County District Attorney’s office.  The district attorney’s office decided not to file charges.
The CHP did not provide Schmidt with a certificate describing his arrest as a detention as provided for at Penal Code § 851.6(b).  The CHP also did not update the arrest, which has a certain stigma of guilt, as a detention to the Department of Justice (DOJ).

Schmidt learned about these problems on his own when he looked at his own criminal history, perhaps by submitting to a Live Scan of himself.  He was outraged and suspected this was systemic failure or even a regular practice by the CHP.

He then hired an attorney and brought a civil class action case against the CHP.  The class consisted of all those people arrested by the CHP in Santa Barbara County, taken into custody, booked, released from custody, and who did not have an accusatory pleading filed against them in the Santa Barbara County Superior Court and who did not receive a certificate of detention from the CHP and did not receive a disposition notice that the action was a detention only on their criminal record maintained by the California Department of Justice.

The compliant sought an order that the CHP issue such a certificate of detention, as required by Penal Code §§ 849.5 and 851.6 and then update the records with the DOJ.  The trial court agreed with Schmidt that the CHP did violate this statutory duty and issued the order Schmidt requested.  The court also awarded Schmidt attorney fees for his class action.  Such fees were sought under California Code of Civil Procedure § 1021.5, the Private Attorney General Act (PAGA), in the amount of $296, 100.

The First District called such arguments “fanciful” and suggested they bordered on frivolous.  Moreover, the arguments suggested law enforcement had the same powers as a prosecuting attorney, which certainly is not true.

The appellate court seemed almost angry at having to consider the frivolous arguments made by the CHP, commenting, “we give the words of a statute their plain, common sense meaning.”  California School Employees Assn., Tustin Chapter No. 450 v. Tustin Unified School Dist. (2007) 148 Cal. App. 4th 510, 517.  Here, the court held, the language of the statutory is clear and unambiguous.

Applying this plain, common sense meaning, a person is “released” when free to leave police custody, whether the person is released on a notice to appear, on bail or on own recognizance.

We like this ruling.  If an arresting agency makes a mistake in its decision to arrest someone, they should “clean up their mess,” and simply follow the law.
The citation for the Second Appellate District Court ruling discussed above is John J. Schmidt v. Cal. Highway Patrol (2d App. Dist., 2016) 2 Cal.App.5th 1287.
For more information about no files, a dismissal and the CHP, please click on the following articles:
Contact us.