In 2007, Defendant Jason Brooks was charged in Alameda County with 21 counts of robbery (Penal Code § 211), with most counts carrying an enhancement for personal use of a firearm (Penal Code § 12022.5(a)).
He ultimately entered into a plea bargain, agreeing to plea no contest to three counts of second degree robbery (Penal Code §§ 211, 212.5) together with the firearm use allegation (§ 12022.5) in exchange for a stipulated term of 19 years and eight months in state prison.  The People dismissed the remaining counts and the judge imposed a sentence in accordance with the plea bargain.
At the sentencing hearing, no testimony was taken or evidence introduced about his military service or substance abuse issues.

In a Nutshell:  A petition for resentencing under AB 865 (Penal Code § 1170.91(b)(1), is improper if defendant entered into a plea bargain because the judge had no role in choosing a sentence and, moreover, petitioner agreed to the sentence.

In 2014, the California Legislature amended Penal Code § 1170.91 to add subsection (a), mandating consideration of trauma resulting from military service as a mitigating factor when a court exercises determinate sentencing triad discretion.  See People v. King (2020) 52 Cal.App.5th 783, 786.
In 2018, in Assembly Bill 865 (AB 865) the Legislature amended 1170.91 to add a retroactivity clause and a procedure for resentencing in 1170.91(b).  Subdivision (b) allows a person currently serving a prison sentence for a felony conviction, “whether by trial or plea,” to petition for a recall of his sentence provided he meets the following initial requirements: (1) he is or was a member of the United States military, and (2) he “may be suffering from sexual trauma, traumatic brain injury, post-traumatic stress disorder, substance abuse, or mental health problems as a result of military service . . . “  Penal Code § 1170.91(b). 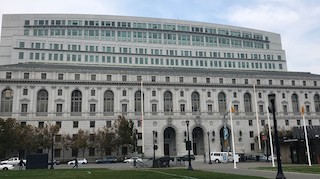 Court of Appeal First Appellate District San Francisco
A section 1170.91(b) petitioner must allege: “(A) [t]he circumstances of suffering from sexual trauma, traumatic brain injury, post-traumatic stress disorder, substance abuse, or mental health problems as a result of the person’s military service was not considered as a factor in mitigation at the time of sentencing,” and (B) [t]he person was sentenced prior to January 1, 2015.”
Provided that the petition so alleges, the sentencing judge or in her or her absence an assigned judge of the sentencing court “shall determine, at a public hearing” held upon proper notice, whether the petitioner satisfies the requisite criteria.  If those criteria are met, the petitioner may be resentenced, in the court’s discretion, with trauma resulting from military service taken into account as a mitigating factor.”
In 2019, acting in pro per, Brooks filed a petition to recall his sentence under AB 865 (Penal Code § 1170.91(b)(1)).  In it, he alleged he was a member of the U.S. military, that he developed a substance abuse problem as a result of such service, that he was sentenced prior to January 1, 2015, and that neither his military service nor his substance abuse was considered as a mitigating factor “during his sentencing hearing.”
The petition sought resentencing in which these newly recognized mitigating factors could be taken into account.
The trial court judge in Alameda County assigned to the matter summarily denied the petition, noting that Brooks’ military service and his drug use were known to the sentencing court before his sentence was imposed, that Brooks never requested those facts be considered in mitigation, and that in any event there was no proof his drug use was caused by his military service, and that even if it was, Brooks agreed to a stipulated prison term in his plea bargain, so the judge had no power to resentence him.
Brooks appealed this ruling to the First Appellate District, which in People v. Jason Brooks (2020 DJDAR 132553) affirmed the trial court ruling.
In Brooks’ appeal, he argued that he was entitled to a hearing because section 1170.91 states that such a resentencing is permitted whether the sentencing was “by trial or plea.”  He pointed out that Proposition 47 (Penal Code § 1170.18) permits resentencing from a felony to a misdemeanor when the earlier felony conviction was by plea.  Likewise, Senate Bill 1393, now codified at Penal Code § 1385, permits a judge to dismiss a prior serious felony enhancement involving a nonfinal guilty plea with a stipulated sentence, citing to People v. Stamps (2020) 9 Cal.5th 685.
The First Appellate Court responded to the argument involving Stamps, pointing out that at pages 706 to 707, the court does not just strike the sentencing enhancement for the prior serious felony conviction; it voids the entire plea bargain altogether, thereby “restoring the parties to the status quo ante.”
Turning finally to Brooks’ argument that since 1170.91(b) refers to resentencing “whether by trial or plea,” the First Appellate District ruled that the analogy Brooks drew to Prop 47 and SB 1393 is inept insofar as in those cases, the judge rejected the stipulated plea agreements categorically.  That is not what 1170.91 does.  It does not eliminate the legal basis for his conviction or grant the trial court unfettered discretion to reconsider an aspect of his sentence that would then affect the plea bargain.  Thus, by agreeing to a specific term, he was ineligible for resentencing with enhanced mitigation.
The citation for the First Appellate District Court ruling discussed above is People v. Jason Brooks (1st App. Dist., 2020) 58 Cal. App. 5th 1099, 273 Cal. Rptr. 3d 96.
For more information about a former military servicemember’s petition for resentencing under Penal Code § 1170.91, please click on the following articles:
Contact us.
Serving Torrance, Long Beach, Compton, Airport Courthouses and Other Courthouses.